Recently, I read about a new disruptor in China that was looking to become the new Uber… of umbrellas.

At first, I thought “wow!”, this is a pretty novel idea. It’s unique, it is something in demand when certain things happen (it starts to rain), and it’s a pretty simple concept that should be relatively easy to implement. Except, in a matter of weeks, most of the 300,000 umbrellas that they started with at launch had gone missing. You can read about it here (businessinsider.com).

The company failed to understand the needs of the customer, and the customer’s journey. Instead, they went for the lofty goal of bringing disruption to a market, pretty much only for the sake of disrupting it. “We were really impressed by the bike-sharing model” is the pretty telling and informative quote from the founder…

When it’s raining, what do you normally do?

Living in Melbourne, many people carry fold-up umbrellas in their bags all year round. It’s part and parcel of living with slightly chaotic weather patterns, and the fact that we all realise the weather is extremely difficult to predict. This isn’t unique to Melbourne, though. Others scurry from shelter to shelter, making their way to their destinations, dodging the falling drops where they can as to not mess their attire.

So, what if you had an umbrella within arms reach, just before you exited the train station, office building, or other complex as it started to pour? It was cheap and convenient, right there. You’d probably take it, considering the alternative of a damp afternoon! Into the machine the credit card goes, out comes the umbrella, and off to your destination you go…

And you get there, dryer than otherwise. But, where do you put that umbrella?

Likely, it ends up in a corner to dry out, or in a stand to drip. Maybe it ends up in one of those plastic sleeves that are often conveniently positioned in the foyers of large office buildings. Wherever it ends up, it’s out of sight and out of mind.

What to do with the umbrella? Well you could go back to where you got it from, and put it back into the machine. Maybe one could try and find another one of those machines… however, none of these options are on your path of where you need to go. Maybe we’ll leave that umbrella in the corner until tomorrow, when I might have to go past one of those machines again!

All of a sudden, a week has blown by, and the umbrella is still in the corner.

This story is entirely relatable to most of us because this is exactly what happened to the Chinese company that started umbrella-sharing. It also describes how we behave when it starts raining; even with our own self-owned umbrellas, we might forget them at work, leave them in the back of a taxi (or Uber), at a friend’s house, or pretty much anywhere else. They serve a pretty simple purpose, keeping us dry – or shaded – while we go about doing other things.

Understanding the part it plays in a customer’s journey, we can change the way one would respond to the demand. We know that an umbrella’s usefulness is limited to particular events, mainly inclement weather. We also know that when the event’s over, so is the umbrella’s usefulness. In fact, carrying around something you don’t need, and will look a bit silly using, is a particular burden.

That last point is also a bit sticky – if we know that an umbrella is likely not going to come back because it’s outlived its usefulness at the time, what could we do differently? 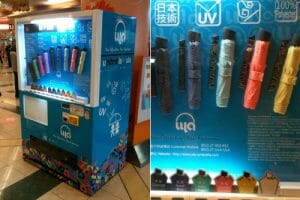 The points of distribution aren’t really in question. I’m sure that many of us have been in the position of wishing we had access to an umbrella when we step off a train and it’s started to rain. A different response to that might be to make umbrellas available that aren’t expected to return. Selling an umbrella… not renting them out.

This isn’t a new idea, though. It doesn’t really need disruption. In Japan, they have had umbrella vending machines for years now. They are cheap, and in convenient locations.

Not all disruption works, and sometimes the oldest tricks are still the best. ☂️